This is my personal ‘cheat sheet’ on common concepts you’ll encounter on your deep learning journey! My goal was to create a 2-page at-a-glance document that could serve as a reminder on how each component of a neural network works and how each fits into the bigger picture. It isn’t designed as a beginner’s document, but rather as an aid to memory and conceptual understanding. I spent a good few hours (days / weeks!) working through Udacity’s Deep Learning Nanodegree, as well Andrew Trask’s excellent book Grokking Deep Learning. These are both resources I can highly recommend if you’re after depth and detail, and they are also the main sources of inspiration for my cheat sheet which you can download here:

I like to think of a neural network as a rather sophisticated process of ‘trial and error’. Except that at each attempt, we are learning how to reduce the amount of error. Imagine a student in class trying to answer the question ‘How much is 1 + 5?’. He doesn’t have a clue how to answer the question, so he guesses: ‘It’s 19’. The teacher replies ‘No, that’s too high, try a lower number’… The student goes through many guesses, each time getting feedback on whether the number is too high or too low, and eventually, with enough clues from the teacher, he’ll reach the conclusion that the answer is 6. Of course, this is not the optimal way to learn how to add up numbers! But it turns out it’s not a bad analogy for the way a deep learning algorithm learns…

Let’s suppose we have historical data from a class of language students going back a few years. Each student received a % grade for class assignments, written tests and oral tests completed during the year (these are our features); and we also know whether these students passed or failed their final exam (this is our target). We’d like to use this data to learn to predict which of the current year’s students will pass or fail, based on their grades so far.

The forward pass is all about ‘taking a guess’. Let’s think of how an experienced teacher might mentally review the data available. She might say to herself ‘usually if a student does well on the written tests they will also do well in the final exam’ – and so our teacher would give greater weight to the written test grades compared to the other grades. At its most elementary level, therefore, the guessing game is just a weighted sum (which we also know as the dot product). Remember that the purpose of a weighted sum is usually to lend more importance to some aspects and less to others. But at the outset our neural net has no experience, so it starts with some random weights and has a guess at the answer.

Our first step, to move from the input layer to the hidden layer, is therefore to find the dot product of our inputs and our weights (take note of the tensor shapes involved here).

Our second step is to apply an activation function to the result. Activations functions are part of the secret sauce that enables neural networks to train effectively. In our example, we’re using the sigmoid activation function which is serving 2 purposes:

Having made it to the hidden layer, we can think of those 2 hidden nodes almost as ‘preliminary guesses’ in the guessing game! Node 1 might say ‘I think the student will pass with 80%’, while Node 2 might say ‘I think the student will fail with 30%’. We then repeat the dot product > activation function process to move from our hidden layer to our output layer (and our final answer). If the weights assigned to Node 1 and Node 2 were equivalent then our final guess would be that the student would pass, BUT it is likely that our network will give one node more weight than the other so it’s equally possible that, by giving more weight to the ‘fail’ Node 2, our final guess is that the student will fail.

Now let’s look at the error part of ‘trial and error’. The function that is used to measure the amount of error is called the error function (fabulous and memorable!), but as usual there are a multiplicity of other terms which all mean the same thing so you may see any of these:

Either way: it will measure how big the error is, and our goal will then be to reduce the error (aka minimize the error) at each guess as efficiently as possible to arrive at the correct answer.

There are many different functions that can be used to measure error (this article on Medium has a nice summary of some of the most popular ones).

Whatever function you use to measure error there are 2 golden rules:

In our scenario we will use the binary cross-entropy error function which is commonly used in ‘yes-no’, ‘pass-fail’, ‘win-lose’ type of scenarios.

Back propagation – the blame game 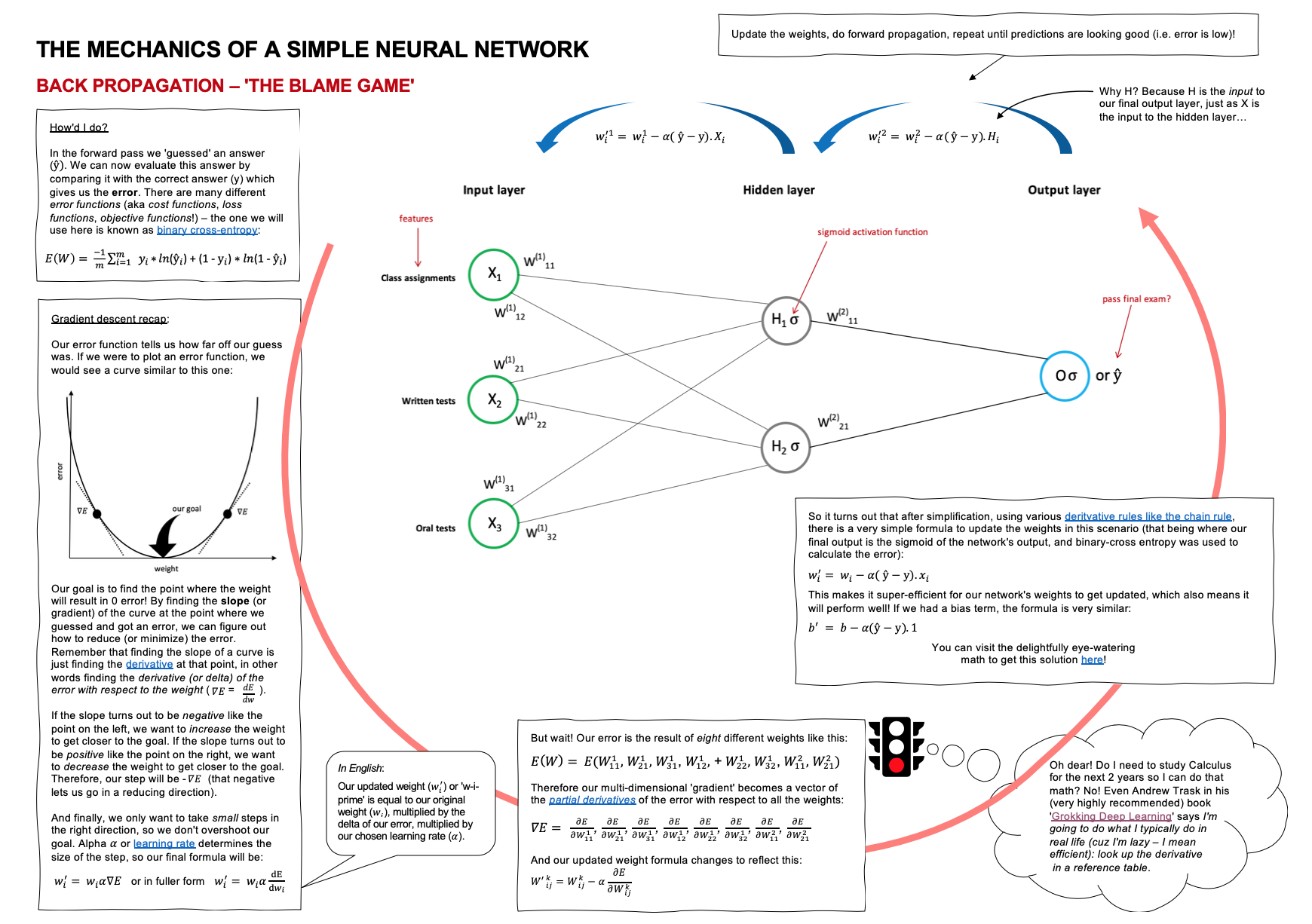 We can think of gradient descent as the method we use for finding a more optimal route from the initial random guess to the eventual correct answer. Let’s come back for a moment to our student who was trying to learn that 1 + 5 = 6 by guessing. His first guess was 19. If his second guess, after receiving feedback that 19 was too high, was to try -24, you can imagine that he might be there for quite some time: too high, too low, too high again, etc. Whereas if he cautiously amends his guess each time, maybe choosing 16, then 12, then 8, then 4, and finally 6, he’ll get there a lot faster. Controlling this cautious amendment of guesses is what gradient descent is all about.

The complexity in doing this in a neural network is that there is not just ONE weight to adjust but many: 100’s or 1000’s or more… and each one must be assigned their share of the blame! Therefore ‘gradient’ or ‘slope’ becomes a multi-dimensional vector of the partial derivatives of the error with respect to all of the weights. There is some eye-watering math you can do to calculate this manually (Matt Mazur’s step-by-step example is highly recommended for this purpose), but fortunately in practice, PyTorch or similar libraries, will take care of this step for you.

As many times as is necessary until your error has been reduced to an acceptably low level, and you are satisfied with your predictions!